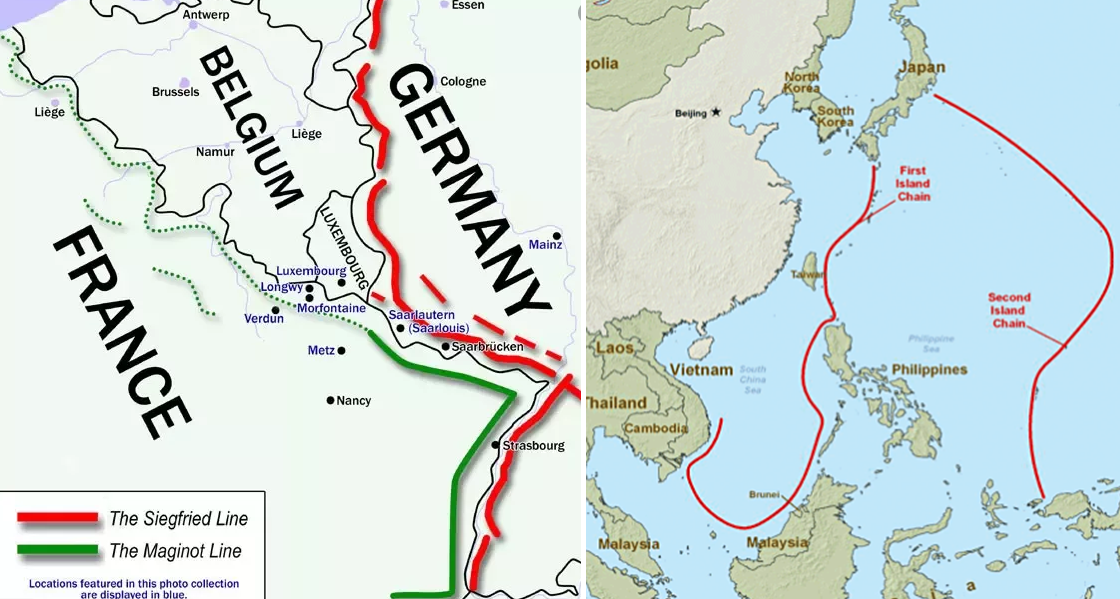 In today's rapidly shifting geopolitical landscape, lessons drawn from history are more vital than ever. In my new book, The Road to Wars, I discuss the algorithmic expansion of an aggressive and aspirational hegemony. I utilise both past and present to better understand and predict Chinese intentions and actions. Having done so, I can honestly say history really does repeat itself. Once Hitler reoccupied the Rhineland and constructed the Siegfried Line he became much more overt and aggressive his expansion. Similarly, with the bulwark of the First Island Chain firmly in place, Xi has become equally as aggressive and overt in his ambitions.

The Significance of the Siegfried Line To Hitler's Expansion Strategy

Hitler's Third Reich was an excellent example of algorithmic expansion from a military state. As Bismark noted, Germany was forged in the fire with the Austro-Prussian War of 1866, the Franco-Prussian War of 1870 and World War One. Having failed the first time, Germany's second great challenge for power commenced in 1936 with the re-occupation of the Rhineland. This act violated both the Treaty of Versailles and the Locarno Treaties. Debatably, it was the critical moment when Hitler realised France and Britain would not act against him, despite these countries possessing vastly superior military capabilities. The geopolitical implications were that once the Siegfried Line was constructed to protect the western flank of the Rhineland, France could not link up with its allies (Italy, Czechoslovakia and Poland) to contain Germany. This a signal to Hitler that France, as well as the continent of Europe, could be Germany’s for the taking. 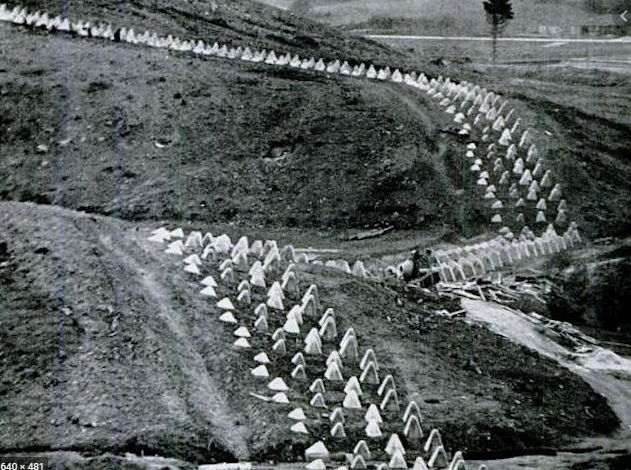 The tank traps of the Siegfried Line

So, why did France and Britain fail to act? Why did France and Britain allow themselves to become so vulnerable? The main reason was that both were in decline. Following World War One and the Wall Street Crash, they were economically exhausted. To compound this France was gripped in a financial crisis as the franc struggled to be linked to the gold standard. This highlighted French economic and industrial weakness. This mindset is of great relevance to the current Wuhan pandemic, its economic impact and that mindset potentially disabling a decisive American response.

Emboldened by the Rhineland reoccupation, Germany began to support Franco in the Spanish Civil War from July 1936. Again, France and  Britain did nothing. Encouraged by the lack of opposition,  Hitler annexed Austria in 1938. Thoroughly emboldened after this event, Hitler aimed his sights on the Sudetenland in Czechoslovakia where a minority of Germans lived. Ultimately, Britain and France acquiesced and agreed to the annexation of the Sudetenland in an effort to appease Hitler. Chamberlain came home to echo the deluded words “Peace for our time”. Only a year later World War Two began.

The lesson is very clear. Unless an expansive, aggressive totalitarian state is deterred from the outset it becomes emboldened and strengthened with each acquisition. In essence, the fear of war starting on behalf of the established hegemony precipitates the very outcome they seek to avoid. Deterrence backed by military capability and a strong political intention to act is the only historic measure that has proven effective in preventing wars.

However, the most notable similarity between German and Chinese expansion is the implementation of the Island Chain Strategy. Like Germany, China is blatantly violating an international agreement on the placement of military forces. The building of a chain of military bases constructed from coral atolls have effectively annexed everything within its arc. In Germany's case, the Rhineland was both a block to France and a key resource to build up the industrial-military complex. Similarly, the Chinese Island Chain Strategy is a mechanism to gain control of the access to the world's oceans. At the same time it pushes the US Navy back to a distance that protects the Chinese mainland. It also increases China's natural resource base and places the productive power of the Far East within Chinese control. This resource base includes Taiwan, South Korea, and Japan. For China, this represents the first vital step to becoming the next global maritime hegemony. Sadly, like with Germany, the West has done little to stop the expansion. 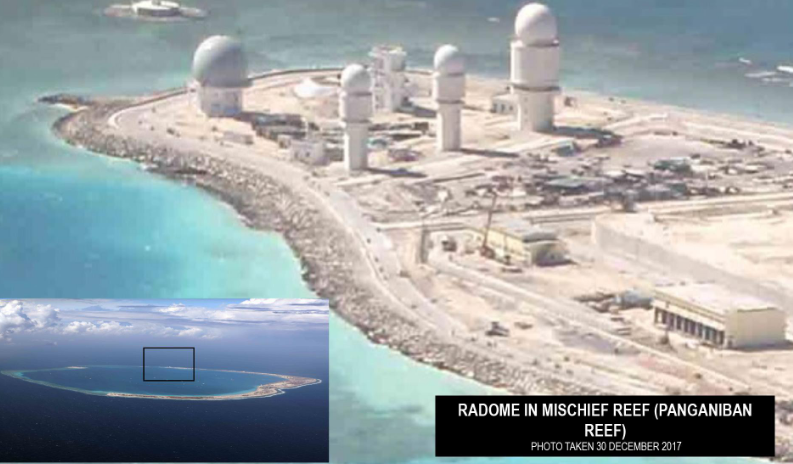 The Chinese strategy in regard to the first, second and third chains is as follows;

The First Island Chain begins at the Kuril Islands and finishes towards Borneo and the northern Philippines. The key part of the first chain is Taiwan, occupying a strategic position in its centre. Controlling Taiwan can effectively cut off the strategic choke point between the East and South China seas. It also provides a convenient channel to the Second Island Chain, as well as to the rest of the Pacific. Because the island chain is built from a series of landmasses, it is also called the ''unsinkable aircraft carrier''. This is especially prevalent in the case of Taiwan.

The Island Chain Strategy holds strong echoes of Japan's strategy to control the region against the US Navy in 1941. The PLN and PLA view the First Island Chain as the area it must secure to deny access to US aircraft and aircraft carrier groups. The doctrine aims to seal off the Yellow Sea, the South China Sea and East China Sea inside an arc running from the Aleutians in the north to Borneo in the south, buffering the Chinese mainland from attack.

The Second Island Chain refers to the island chain formed by the Bonin Islands and Volcano islands of Japan, in addition to the Mariana Islands which are United States territories. If secured, it will act as a second strategic defence line against the United States. If this is accomplished, it will push the US Navy carrier and strike groups far enough away to become impotent against the Chinese mainland.

The Third Island Chain is the final part of the strategy. It begins at the Aleutian islands and finishes up in Oceania. The key part of the Third Island Chain would be the Hawaiian Islands of the United States. This would then constrict US power and place it back on the defensive, providing a launch pad from which the Western seaboard could be invaded.

China's construction of atoll bases (with dubious legality) is of a similar magnitude to Germany's reoccupation of the Rhineland. In essence, it inhibits America's ability to support its allies within its boundary of the First and Second Island Chains. This is just like the French being unable to support their Eastern allies after 1936 due to the annexation of the Rhineland. Xi, just like Hitler, will be emboldened by Western inaction and continue to make aggressive moves. If we are to avoid war and a repetition of history, America must redouble its commitment to deterring Chinese expansion and aggression in the Pacific region. If that fails, it needs to act decisively to reverse any Chinese invasion.

US Chinese Polarisation is accelerating

Just as the polarisation between Germany, Britain and France increased post 1936, history is replaying the same tune with China.

As we highlighted in THE ACCELERATION OF US-CHINA POLARISATION, the polarisation between America and China is both alarming and inevitable. New examples are splattered across our headlines every day. America is fully engaged in the process of reactionary secondary polarisation. Examples of this include Trump blocking future US investment in China, the US forcing Britain not to use Huawei 5G technology and Pompeo encouraging Israel to limit military technology exports and trade to China. Pompeo has also correctly stated publicly that China is a danger to the free world. This is all transpiring as we predicted with lawmakers in America preparing to make China pay for its actions around the spread of the Wuhan Virus. In the Senate, Republican Linsey Graham has introduced the COVID-19 Accountability Act which paves the wave for sanctions, asset freezes and travel restrictions against China. Ultimately, I suspect this will include Chinese treasury holdings.

The key point is that the US-Chinese polarisation level is currently at a stage where we are migrating to full economic bifurcation. With this progression, the risks of a proxy conflict are increasing significantly. Let's hope that American political intention and military capability is sufficient to act as a better deterrence than the French hubris of the 1930's.